This article is for everyone who struggles to wake up earlier every day. I know not everyone wants or needs to be an early riser. There were many years when my husband worked shifts that I stayed up later because he worked late.

But there are many of you who want to wake up early but struggle, I struggle too.

I don’t consider myself a morning person or an evening person. My best hours are from 9 am to 2 pm.  I am also not one who feels energized when I wake up before the crack of dawn.

To be honest, I feel tired.

Since I have struggled in this area I figured I would share some of things that have helped me make the change to become an earlier riser. And if we are being honest, when I say early I mean 6 am. I will never be a 4 am person, I have teenagers, and they seem to want to do all their talking after 10 pm.

Simple Ways to Wake Up Earlier

Cut out the Caffeine

I don’t drink it after 1pm, no matter what. If I do I can’t fall asleep even when my body is exhausted. My mind can’t relax enough to fall asleep.

I’m guilty of surfing the web before I go to bed, especially now that I have an iPad. For many months I even read on the computer in the evenings. I have found that computer, television, tablets, and video games do not help you fall asleep.

Not only do they keep you awake, it is easy to turn on the television to catch the end of a show and end up watching another hour or two because we get sucked in! If you need to do something before you fall asleep try reading a book.

Sounds simple, but for some reason it is so hard. I often find myself glancing at the clock and realizing it is almost midnight! Give yourself a bedtime and set a timer to remind yourself it is time for bed. If I want to fall asleep at 10:30 I try to go to bed at 10pm and give myself a little extra time for reading.

Reader tip: Set your alarm on your phone for an hour before you want to go to bed. That will remind you that you need to start getting ready for bed and winding down so your bedtime doesn’t sneak up on you.

It is hard to fall asleep earlier if you are waking up later. There will be a few days in the beginning where you have to force yourself to get up early even though you were up late. Pretty soon you will be tired enough to fall asleep at the earlier hour.

This year since we had a change in our school schedule, I need to get up before 6am. This was a huge adjustment since we were really enjoying our lazy days of summer. I eased into an earlier schedule by setting my alarm clock 15 minutes earlier every few days. Now I wake up before my alarm several days a week because my body is use to the new schedule.

If you are just starting to change your routine I would recommend going to bed and waking up 15 minutes earlier every day until you reached your desired wake-up time. (see above)

Recently I adjusted my schedule to wake up a little earlier. After two successful early mornings my family came down with the crud. I wasn’t going to bed until after midnight most nights and was up with sick kids numerous times throughout the night.

So I turned off my alarm and got some extra sleep so I didn’t get the crud too! I was discouraged to be thrown off track so quickly, but I realized that the crud would soon pass and I could get back on schedule.

Don’t let little setbacks discourage you, just pick up where you left off and work on establishing a good routine. 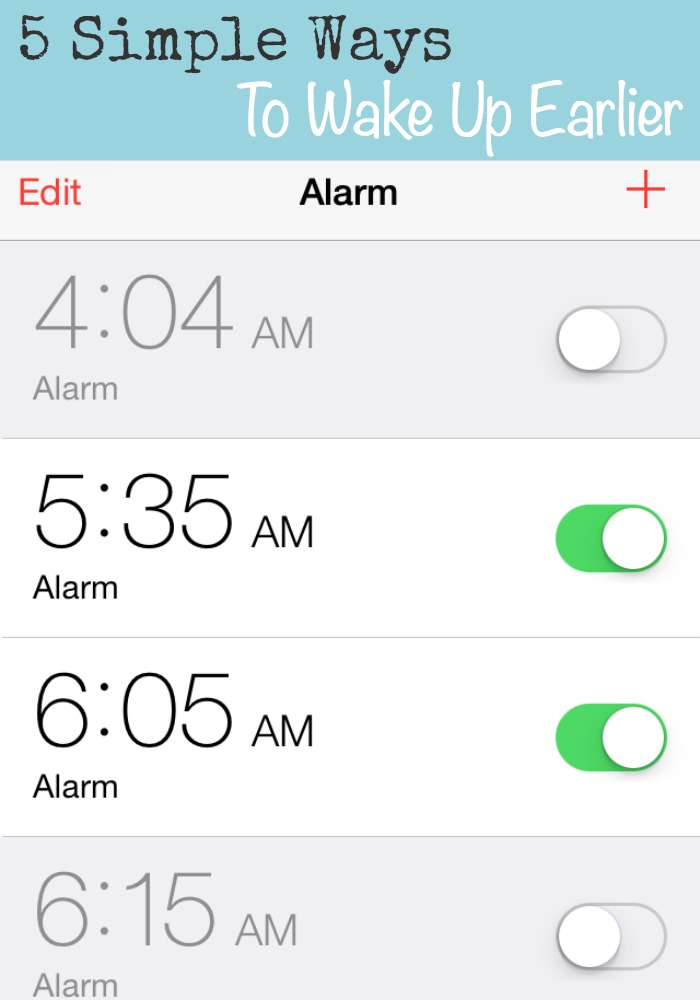