Do you know how to cook a pumpkin? I didn’t until a few years ago when stores started running out of canned pumpkin around Thanksgiving.

Not only is it easy to cook a pumpkin, you can store the extra pumpkin in your freezer for several months!

Many recipes suggest cooking a pumpkin in the oven. However, since I live in Florida and didn’t want to turn on my oven in the 90+ degree heat I decided to cook a pumpkin in my crock pot.

How to Cook a Pumpkin

I searched the internet and was surprised that I couldn’t find any tutorials for cooking a pumpkin in a crock pot. Always one to experiment in the kitchen, and having an extra pie pumpkin on hand just in case the crock pot pumpkin experiment went totally wrong, I decided to try it anyway.

All you need to cook a pumpkin in a crock pot is a pie pumpkin (these as smaller than the “jack-o-lantern” type pumpkins ), a crock pot and water.

I cannot stress enough that this needs to be a pie or sugar pumpkin. There is a difference between pie pumpkins and carving pumpkins. The pie pumpkins are located by the squash and gourds in the produce department at your grocery store. 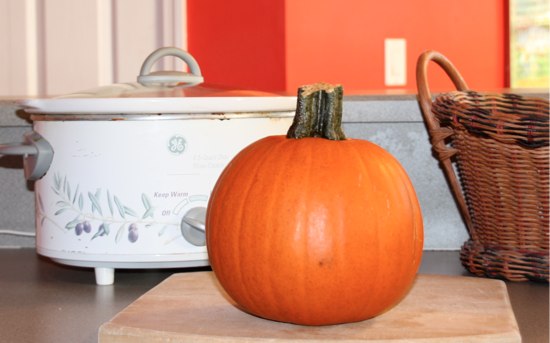 Cut the pumpkin in half

Take the pie pumpkin and cut it in half. This is the most difficult step in the process because pumpkins are not easy to cut! You’ll want to use a serrated knife and use a sawing motion to cut the pumpkin in half.

You can skip this step if the pumpkin is small enough to fit into your crock pot whole.

If you have a small pumpkin and a large crock pot you can put the entire thing in the crock pot and cook it whole. This is actually easier and safer since you don’t have to saw the pumpkin in half.

Use smaller pumpkins to avoid cutting before cooking! 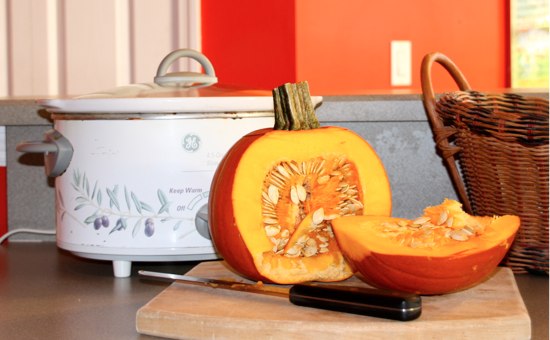 Once you’ve cut the pumpkin in half remove all the seeds and the stringy stuff inside the pumpkin. I usually take a sharp paring knife around the inside of the pumpkin and slice off the strings and seeds but you can also use a spoon or ice cream scoop to remove the innards. 🙂 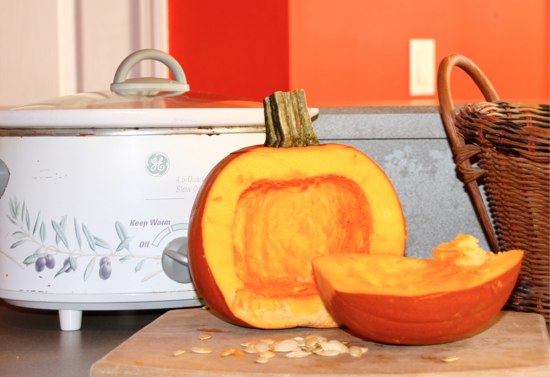 After you’ve removed the seeds and strings you’ll want to cut your pumpkin in a few smaller pieces. How many pieces depends on the size of your crock pot. The larger the crock pot the fewer the pieces. 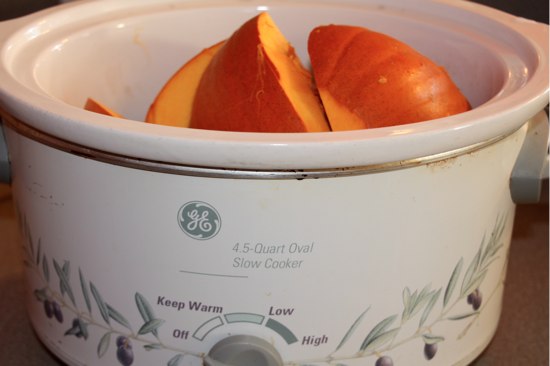 Place the cut pumpkin in the crock pot and add about one cup of water.

You want to make sure you have enough water in your crock pot to cover the bottom with about 3/4 an inch of water.

Turn the crock pot on high and cook for four hours. If your crock pot runs hot you might want to use the low setting and cook a bit longer. 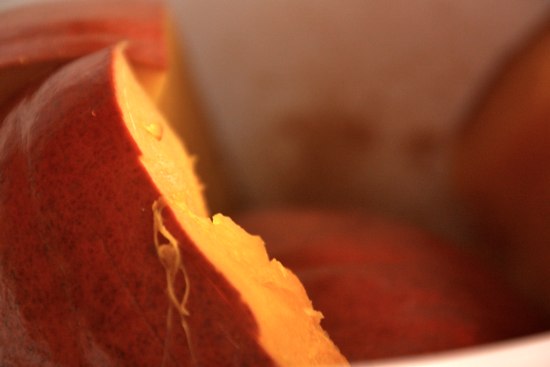 Stick a fork in it!

You’ll know the pumpkin is finished cooking by sticking a fork into the flesh and gently pulling away from the skin. If it “falls off” the skin it is finished. If not cook for a little longer. 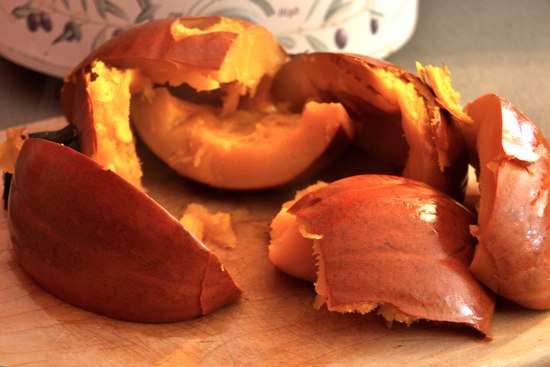 Remove the pumpkin pieces from the crock pot and let cool for a few minutes. Then using a spoon, scoop the pumpkin out of the skin. If your pumpkin has cooked long enough it should be very easy to remove. 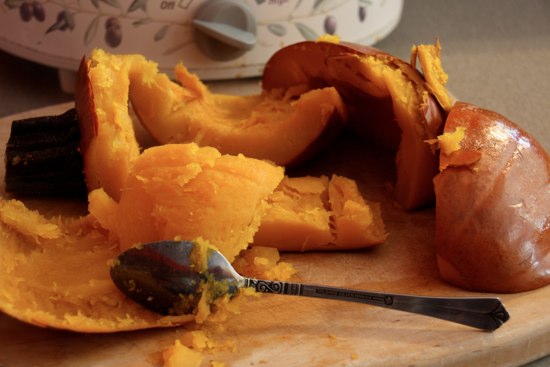 Once the flesh of the pumpkin has completely cooled, puree it in a blender. 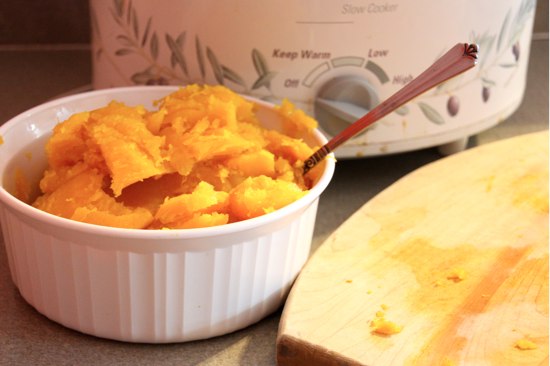 I used Ziploc bags to store the pumpkin. I put two cups of pumpkin in each bag. 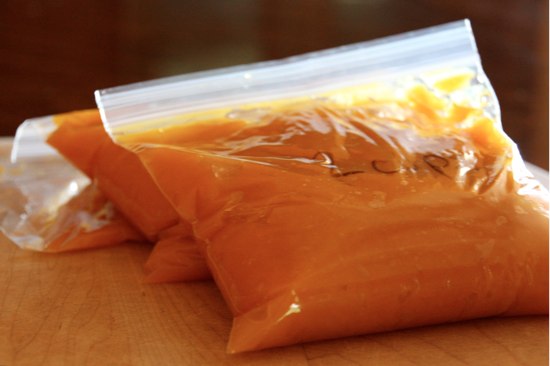 You can store your pumpkin in the refrigerator for a few days or freezer for long term storage.

When you cook a pumpkin in the crock pot it doesn’t absorb much, if any, of the water. This means your puree isn’t watery.

Using a slow cooker also doesn’t heat up your kitchen, which is a benefit to those of us in the south.

Pumpkin is very healthy, loaded with beta carotene and potassium as well as fiber. It’s is a great food to add to your favorite recipes.

This pancakes are a great way to sneak some healthy pumpkin into your child’s breakfast. 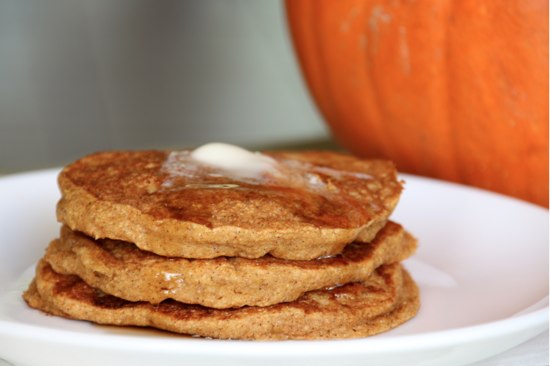 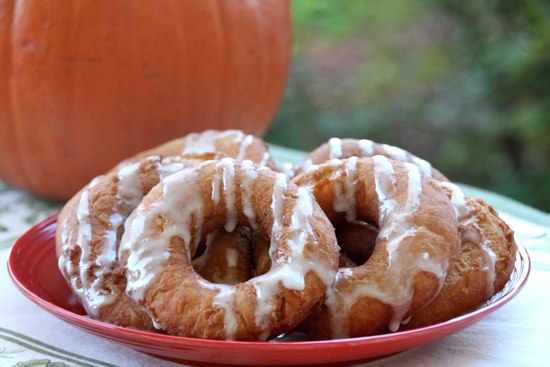 These muffins free well and make a great breakfast or after school snack. 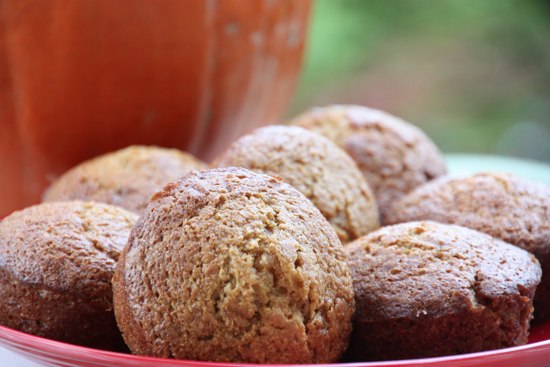 I had my doubts about this recipe until I made it. So delicious! 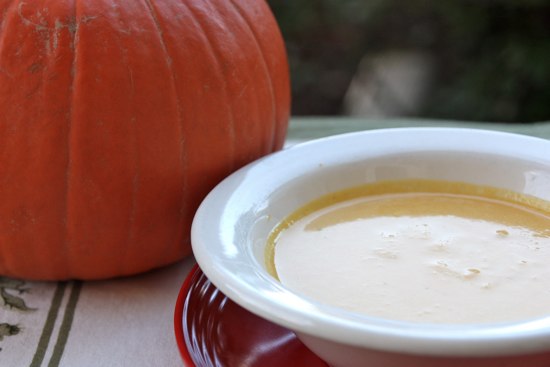 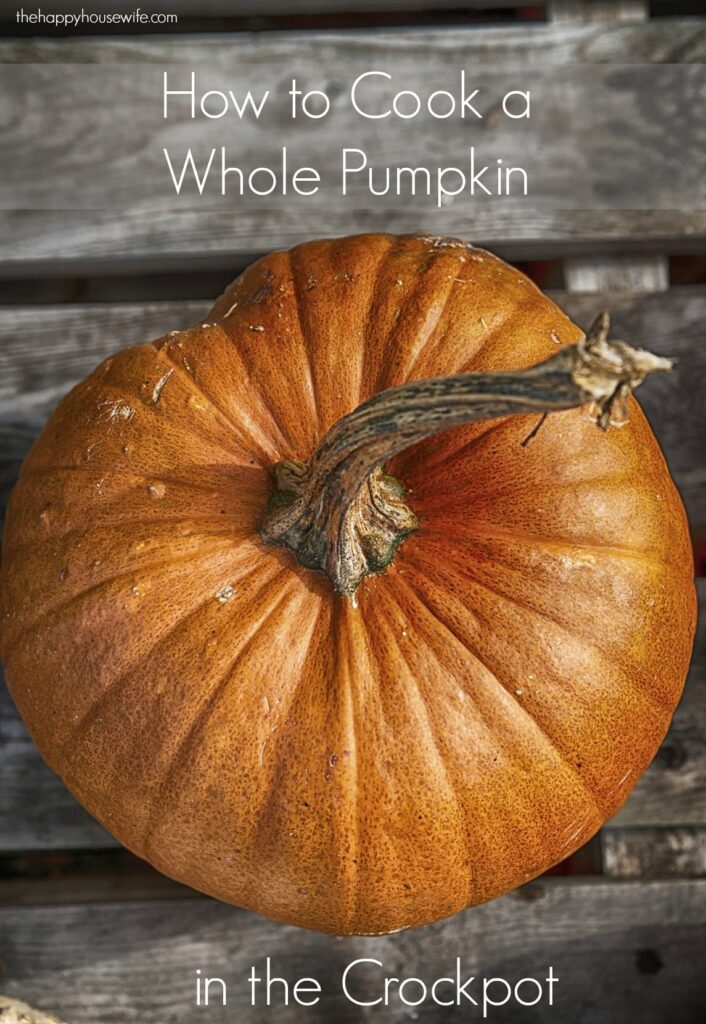