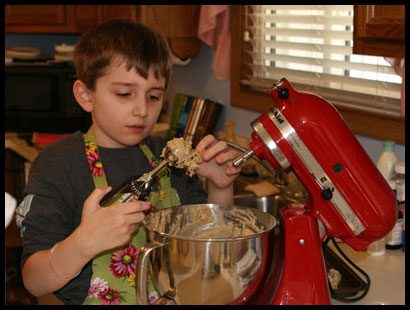 While math is most often thought about in terms of textbooks and computer programs, one of the most memorable ways for kids to work on math (or any other subject) is through applying their knowledge in a real world experience.  Few spots in your home lend themselves to as much real life math practice as your kitchen.  So, grab your mixing bowl and spoons for some math in the kitchen.

Math in the Kitchen for Young Children

Kitchen math doesn’t have to be used only with older children.  Even very young children can work on math concepts in the kitchen. 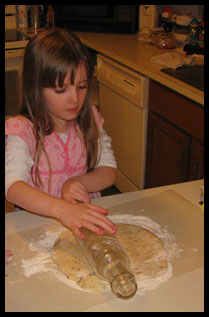 1. Work on one-to-one correspondence by having them pick out how many items to get if each person at the meal needs one of something (such as a spoon).  A higher skill would to work on needing to give two to each person and so on.

2. Introduce the concept of fractions by having children cut or break things into two pieces, and then label that for them as “halves.”  You can then work on breaking things into fourths.

3. Make simple recipes together, such as a fruit salad, where you can count the items added into it.

4. Number recognition can be worked on with number shaped cookie cutters and a batch of sugar cookie dough.

Math in the Kitchen for Older Children

When children have moved beyond the simplest of kitchen tasks, it can be time to work on other types of kitchen math.

3. Work on metric measurements by using a recipe that was written by someone outside of the United States.  Many of those are in metric amounts, which can be great practice for an authentic experience (outside of science) for using metric.  (As a further step, if you are studying a foreign language from a country that uses the metric system, consider working on a recipe in that language.)

4. Practice division and fractions when serving food.  For example, ask children how many pierogies each of the five people in your family can have if there are 15 available.

5. Convert units.  How many pints in a gallon?  How many ounces are in a cup?  These are the types of things that regularly are done on worksheets and then forgotten.  In the kitchen, children will have a hands on chance to work on these concepts.

6. Create a budget.  Budgeting can be an extremely important kitchen skill.  While this doesn’t typically happen right in the kitchen, it greatly affects what goes on in the kitchen.  This is an amazing way to work on money (and food choices) in a very authentic way.

What are some of your favorite ways to work on real world math, even outside of the kitchen?

The following is a post from contributing writer Angie.