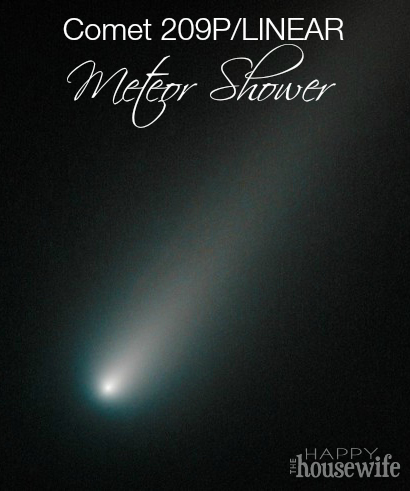 Meteor showers fascinate me. I remember heading outside in the middle of the night with my dad to try and catch of glimpse of meteors streaming through the sky.

Most meteor showers are predicted events based on observed comets in orbit around the sun. Comets are icy solar system bodies that release dust and gas when they get close to the sun. As comets travel through space, they leave a trail of this debris behind them. When the Earth passes through this debris trail, a meteor shower occurs. Meteors are simply cosmic debris that enters the Earth’s atmosphere at a high speed.

On the night of May 24, 2014, we will have the opportunity to see a meteor shower from a relatively newly discovered comet, Comet 209P/LINEAR. This comet was discovered by scientists in 2004. It passed near the sun in 2009 and again in early May, 2014.

Astronomers predict that on May 24th, we will see an amazing meteor shower caused by Comet 209P/LINEAR. Most astronomers are predicting between 200 – 400 meteors per hour, but there are a few who think the show will be even more spectacular.

To see the Comet 209P/LINEAR meteor shower, find a place with few lights and look toward the north. The shower will radiate from the obscure constellation Camelopardalis just beneath the North Star.