There are several reasons I have always hated disposable paper products such as plates, napkins and cups. Among my top reasons, is that most disposables are only used once and then discarded. That means by using disposables I’m literally throwing money away! What a waste of my hard earned paycheck!

Here are a few ways we have adopted over the years to avoid disposable paper products in our kitchen. 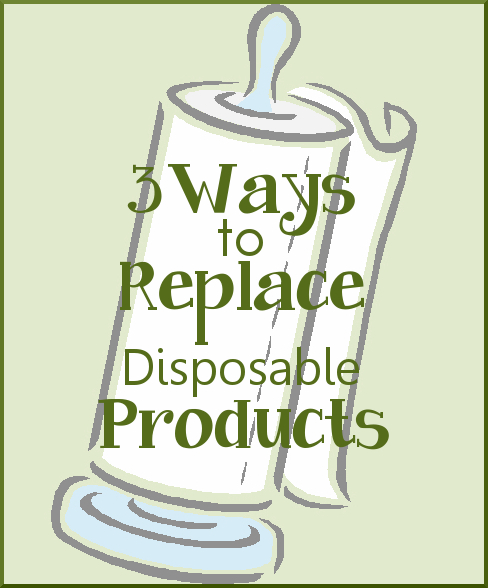 My husband and I quit buying paper towels after the birth of our first child and instead used, what we called, wipe-up towels. These weren’t really towels, but cheap, white washcloths purchased in bulk from the local big box discount store. They cleaned sticky fingers and spills much better than flimsy paper towels and were a cinch to throw in the same load as my kitchen towels.

An even cheaper way to furnish your kitchen with wipe-up towels is to re-purpose old towels into smaller rags. There are some adorable ways to dress them up. I’ve even seen directions on Pinterest for rolling them up like disposable paper towels and pulling them out from the paper towel holder!

I grew up with paper towels used as napkins. But when we had company, my mother brought out cloth napkins. She made me some cloth napkins of my own shortly after I left home. A few years ago, in my quest to lower my household budget, I began using cloth napkins again. Our everyday napkins are simple, unhemmed gingham napkins in a variety of colors. Gingham doesn’t fray and is easily replaced when they get stained and dingy.  Or try this easy tutorial to make Upcycled T-Shirt Napkins!

Ridding your budget of disposable paper products is simple and fun and so much easier on the budget. It is also a great way to re-purpose those old towels and tee shirts!

Books that Changed the Way I Think About Money

The Total Money Makeover: A Proven Plan for Financial Fitness

The Millionaire Next Door: Surprising Secrets of America's Wealthy