Kids love volcanoes. We’ve studied them several times in the years since we’ve begun to homeschool. The great thing about topics like volcanoes is that you can make them as technical or fun as you want and your kids can handle.

Recently, my kids wanted to learn about different types of volcanoes, their eruptions, and how islands form as a result of them. So, despite having made volcanoes before, we dove back into a study of these forces of nature.

This time, we focused on hands-on ways to show different types of eruptions.

In the past, we always turned to the standard baking soda and vinegar eruption when we wanted to play with volcanoes, and we did that this time, too. But, we tried other things afterwards to shake things up. Here are four different volcano activities to try with your kids. 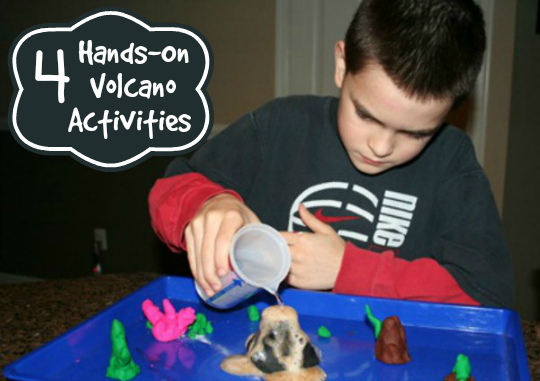 Some islands form from lava slowly rising to the surface and cooling, while piling on top of itself. Look up some of these volcanic islands with your child and talk about their landscapes. Then, take a paper plate and a brand-new tube of toothpaste. Poke a hole in the plate and stick the toothpaste through the hole.

Hand it over to your child and let him squeeze gently, allowing the toothpaste to pool up on itself. Talk about the lava build-up and how this can form new land.

Some eruptions occur in an extremely explosive manner. Gases, heat, and pressure build up and build up until they blow. Try this easy demonstration – take a two-liter bottle of soda and let your child shake. And shake and shake and shake. Then (while standing far away) let him open the top and watch the “gas and ash” blow. You might want to have him wear a raincoat.

For a fun way to show how rock and lava disperse in a violent eruption, use a hot air popcorn popper. Put the recommended about of corn inside the popper, place it on a table, and leave the lid off. Turn it on and step back.

Watch how the popcorn explodes high up into the air with parts of the kernel floating higher – like ash. Observe how the majority of the “rock,” or popcorn, settles at the “mountain’s” base. Leave it alone and pop another serving of corn. See how the popcorn continues to build up? It’s just how mountains continue to grow after repeated eruptions. 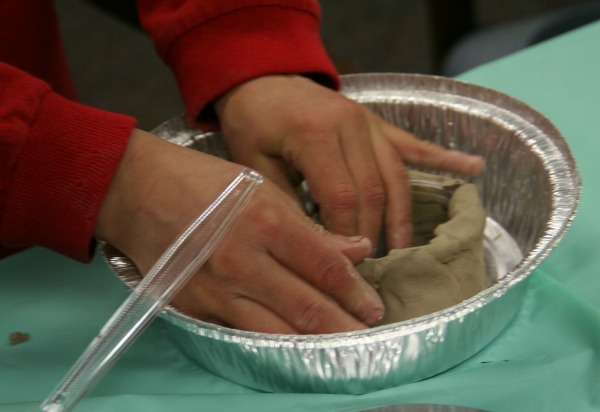 Even if your child has made baking soda and vinegar eruptions dozens of times, there’s something about this simple activity that encourages young thinkers. Try making a permanent volcano that your child can erupt again and again.

Using an air-dry clay, have your child sculpt a landscape in a foil tin or other water-tight container. Give him a small tube like a film canister to use as the basis for his volcano, and have him sculpt around it. Let the creation dry, have him paint it, and once it’s all done, he can pour vinegar and baking soda into his volcano again and again.

These are just a few fun ideas to enhance a volcano study. What other projects have you tried with your kids?