Preschoolers learn best through play and when following their own interests, which is why I currently find myself swimming in dinosaurs for the second year in a row.

My girls are in love with all things dino, and since we’ve already played with cornmeal “digs,” dinosaur play sets, and have done a multitude of coloring sheets and watched countless videos, I needed something new to spark their imagination. 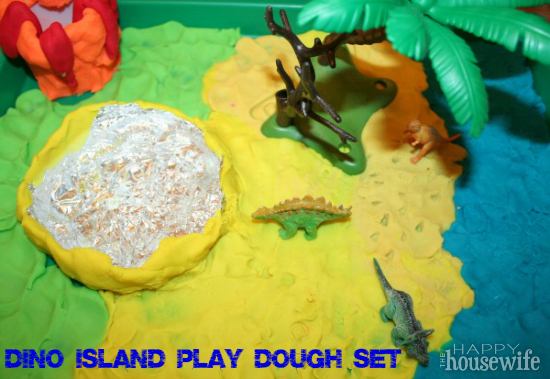 Inspired by a Google image search which uncovered several creative DIY dinosaur islands, the kids and I decided to make our own Dino Island Play Dough Set.

For the sake of ease (and my sanity), I picked up three 4-packs of Play Dough at the Dollar Tree. I knew we wouldn’t be reusing this dough because it would get wet and mashed around, so I didn’t want to bother with expensive or homemade. Feel free to use whatever you have handy. I’m sure you could make some beautiful, natural island-like colors with homemade dough.

First, I sent the girls around the house to collect small plastic dinosaurs, plants, and trees. We had an assortment of Playmobile, Lego, and Safari Limited toys mixed together.

Then, they got to work. 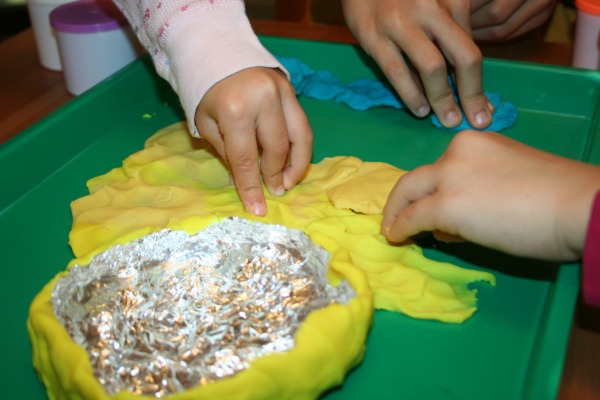 I fashioned a little bowl out of foil, since they decided their dinosaurs needed a watering hole, while the girls smashed blue and yellow dough on an art tray for sand and sea.

My daughter made a volcano by covering a play dough container with orange dough (there wasn’t any brown) complete with red lava flowing down the sides. The girls plan to erupt baking soda and vinegar from their volcano eventually.

Once the play dough island was all set up, the girls added their trees and shrubs, and introduced their dinos to their new habitat.

They played for hours, and my ten year-old son even joined in. In fact, one afternoon of imaginative creation has led to at least an hour of focused, quiet, sensory play for my 4 and 6 year-olds every day for the last two weeks.

I’m not sure why I’m always so surprised by this, but it really is the simple open-ended activities that lead to the most enjoyment for my kids. 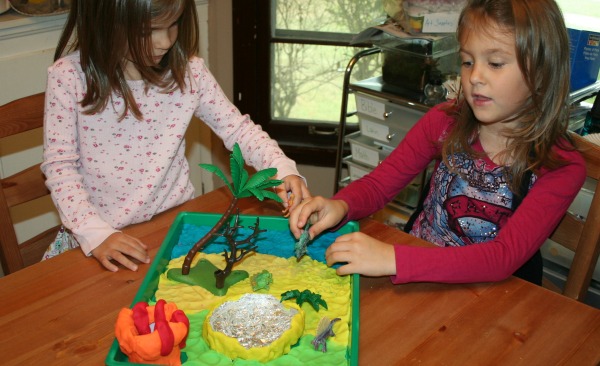 Do you have dinosaur lovers? Grab some dough and encourage them to create their own habitat for play dinosaurs.

How else could you use play dough in creative ways?