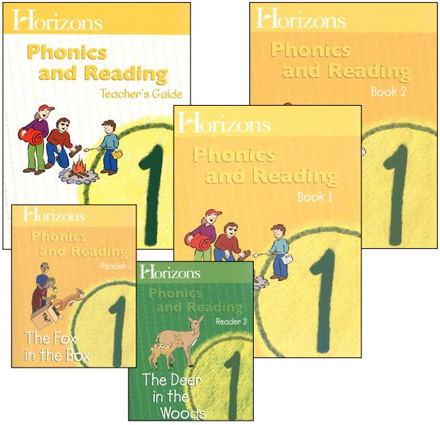 Phonics instruction in early elementary school can help to build a foundation for a future strong reader.  Two of my children spent their early grades in the public school system using a whole language approach and came out as struggling readers.  My youngest began her school career at home with a phonics approach and was able to read and write earlier.

This can, of course, also be explained simply by differences in children, but I believe a phonics approach definitely helped to make this possible.  One of the tools that we’ve used for phonics instruction is the Horizons Phonics and Reading books.

What We Like about Horizons Phonics and Reading Books

What I Would Change About Horizons Phonics and Reading Books

However, there a couple of easy fixes for this issue.  The first would be to make sure that the student works on phonics every single day.  Another option is to use the phonics books meant for one year over the course of more than one school year.  For instance, we opted to use the level one phonics books, since there are two actual phonics workbooks, spread out over both first and second grade.

Other Information about Horizons Phonics and Reading Books

We saw much growth in our daughter’s reading and writing abilities after we began using the phonics program from Horizons.  We will continue to use it, and I feel comfortable recommending it to others as a great addition to their early elementary curriculum.

0shares
« How to Prepare for the SAT and ACT
Elective Curriculum Review: Web Design for Kids »