Growing up, we had pets.  Some of my greatest animal related learning experiences were with the pets we had in our home.  I had a kitten that I rescued, brought home, raised, and helped with two litters of her own kittens.  We had birds when I was little.  My mother had a hamster for a short period of time.  I loved animals and I learned so much from being around them daily. 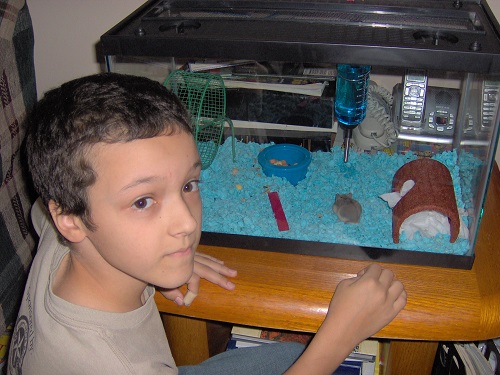 Now, as a homeschooling mother of 9, we have pets.  Allergies prevent us from having certain kinds of animals, however, we’ve been able to learn a lot together about many different animals.

Here are some of our experiences, as well as some pros and cons to each kind of pet.

Our first pets were fish. We got them after an extensive unit study about the ocean. While only a tiny example of all the life in the sea, these little fish were a great thing to my small fry. They were named, loved, and mourned. They survived power outages, freezing temperatures, inexperience, and the occasional overfeeding by enthusiastic preschoolers. However, they did eventually die and another lesson was learned.

We have tried several other times to keep fish alive and we think we finally have it right. It is worth it to see little eyes light up and imaginations run wild about the many different varieties that swim in the lakes, oceans, rivers, ponds and streams around the world, just by watching their own living examples swim around our tank.

Fish are fairly easy to keep, if you make sure you keep their water right and have the correct chemistry. A little research goes a long way. Older kids can definitely keep fish alive by themselves, but younger ones need help, even after the initial set up.

We have a snake. I always wanted a snake growing up after experiencing snakes at school. When the opportunity arose to own one, we jumped at it. In fact, we traded a set of old encyclopedias for the snake and his set up. 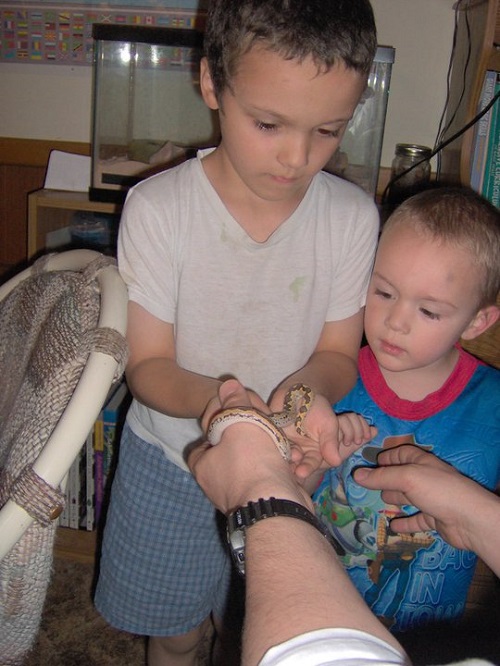 This was amazing for the kids (and their parents). There were so many things to learn about the snake’s habitat, habits, feeding, watering, and other care. You can hold a snake (not fish). We could see his beauty, measure his snake skins, and even watch him eat. Predator and prey lessons as well as all the others. 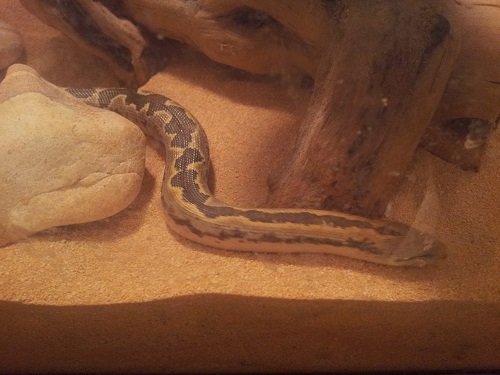 Snakes do bite, but the only one in our house who has ever been bitten is my husband. Our snake also only eats live food, while some will eat frozen. It gets expensive and sometimes a little sad to see a little baby mouse get eaten every week.  I wouldn’t recommend having a snake if this might be a problem.

My second son decided he wanted a hamster around 3 years ago.  He was 12 years old and we felt that this would be a great experience for him. He did the research himself on what kind to get, how to set up the habitat, feeding, and many other things. 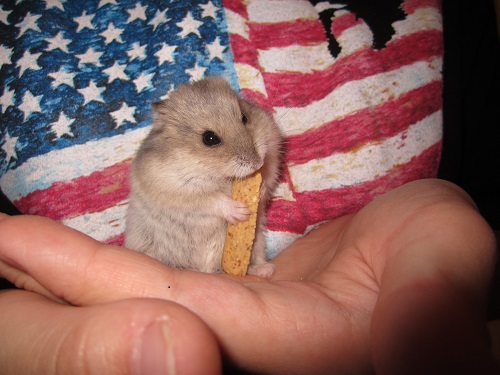 It was a great experience for the whole family. Hamsters can be friendly and interact so much better than snakes or fish. However, even with the best of care, hamsters have a shorter life span than many larger mammals, and again we mourned. A second hamster had an unfortunate accident and our son decided that was enough for him.

The best thing about having a hamster in the house was how fun it was for everyone to interact with the little animal. Whether in a hamster ball or being carefully held with supervision, everyone loved the hamsters.

Again, it didn’t cost much to set things up. The hamsters themselves were not expensive. My son didn’t mind the cleanings and checking for illness or injury. The wheel got noisy in the middle of the night, with hamsters being nocturnal, but it was just a fun quirk.

What about cats and dogs?

The most common family pets are glaringly absent from our short list. The whole family has experienced dogs and cats through friends and family and love them. We just can’t keep them in our home. We’ve also raised insects (and set them free), but while we learned a lot, there is so much more to be learned from having an animal be a part of your daily life.

Love is learned, responsibility becomes a habit, and memories last a lifetime. Our family loves our pets, both for the amazing things we’ve learned academically as well as the principles that last a lifetime.