We hear sounds all the time. The closing of a door. Footsteps in the hall. The click of typing on a keyboard. The refrigerator kicking on. We would call those sounds noises.

We also hear phones ring, kids singing songs, a guitar on the radio, birds chirping. We could call those sounds music. 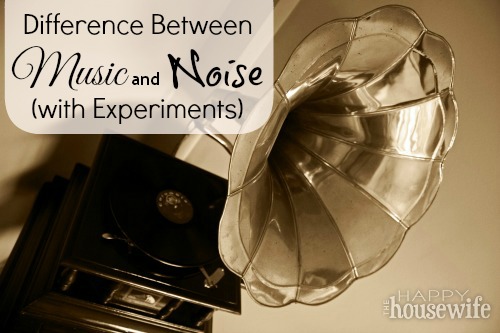 The difference between noise and music is apparent to most of us, but have you ever tried to explain the difference?

Once in your ear, those sound waves cause your ear drum to vibrate. This sends signals to your brain that you heard a sound.

Sound waves can be represented as a wavy line. Music and sounds associated with music such as bells and birds chirping create regular sound wave patterns such as this.

Noises such as doors closing, traffic, or blenders make erratic wave patterns like this. 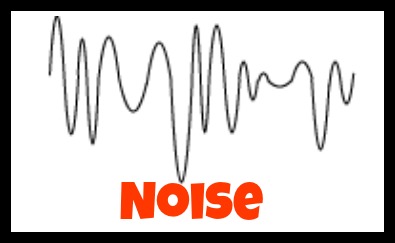 The  real difference between noises and music is in the patterns of their sounds waves. We tend to find regular, orderly sound waves much more appealing and label them as musical sounds.

Sound waves can move through solids, liquids, and gases. Sometimes, it’s hard to image sound as something that can move. Have you ever turned up the radio in your car so loud you could feel the beat in your chest? Or put your hand on a speaker and could feel the vibration? That’s the sensation of sound waves moving the molecules of your body.

Here are a couple more sound wave experiments to try.

1. Using the utility knife, cut a hole about the size of a penny in the lid of the oatmeal box. Replace the lid.

3. Hold the box on its side 5 or 6 inches away from the flame with the hole facing the candle. Tap the bottom of the box. You should see the candle flicker each time you tap the box.

The sound waves moving through the air are moving the molecules around the flame. It is possible to position your box just right so that the sound waves actually put the candle out! Try it!

1. Stretch the plastic wrap over the bowl tightly. This is your eardrum.

2. Place 20 or so rice grains on the tightened plastic wrap.

3. Hold the pan or cookie sheet close to the bowl, but not touching. Bang on the pan with your hand or large spoon making a loud noise. Watch the rice. It should jump each time you bang on the pan. The sound waves created should vibrate the plastic wrap making the rice move.

How can you make the rice jump more or less? Does the type of pan make a difference? Can any other sounds make the rice move? Can you move the rice with music instead of just noise?