The following is a post by contributing writer Angie. 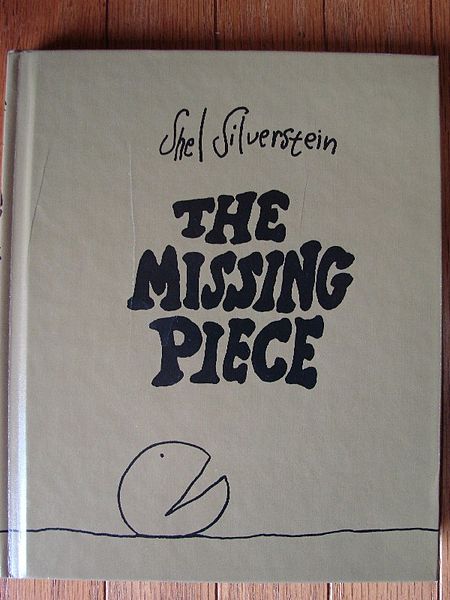 One of my favorite stories from my childhood is The Missing Piece by Shel Silverstein.  It has become a favorite of my children as well, so we have shared it often.  One day, while I was looking at it several years ago, I realized that the simple wording and pictures were something that my own children could imitate.  Thus began our multi-day journey of creating our own “Missing Piece” style books.

While we chose The Missing Piece, I encourage you to look through some of your family’s favorite picture books to see what you might be able to use for your own family.  For younger children, such as mine were at the time, books with simpler wording and illustrations might be better, while older children will be able to make more elaborate drawings and write longer passages. 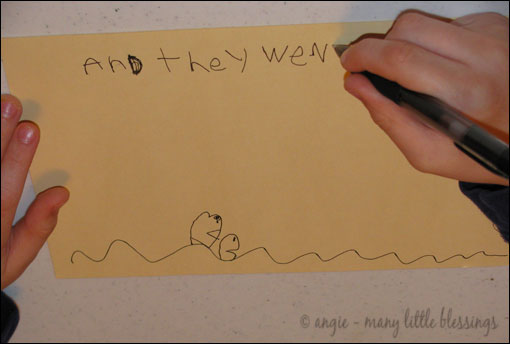 Before Beginning Our Project

Prior to beginning, I talked to the children about my ideas for our project.  We then moved on to reading through both The Missing Piece and The Missing Piece Meets the Big O.  As we read through each story, we talked about the way that Silverstein had used simple drawings to convey bigger ideas.

We followed this up with a discussion of what things we especially liked about the books.  This helped to lead in to talking about ideas for their own stories and drawings.  When one of the kids told me all of the parts of the two books that he wanted to put into his own book, I reminded him that while he could use some things from the book, it might be more fun if he made up his own situations as well.

In order to give the children time to really think about this project, we finished working on it for that day with only having discussed it.  The kids couldn’t help themselves but to continue to come to me with ideas while waiting to start the project the next day.  I love that the delay between discussing the project and actually starting it increased their excitement, as well as giving them time to think about what they wanted to do in their stories.

Prep Work for Mom/Dad: Cut out papers that you will be using all to a uniform size.  Be sure to have more than you think you’ll need!  Gather all the supplies you’ll need, including any special writing implements, colored pencils, stamps, or anything else that is unique to your chosen book.

I wanted this to be a fun project for my children, so I opted to have them complete just a few pages of their stories each day for several days in a row.  While my kids were enjoying it, my boys can get easily burnt out on a lot of drawing and writing (especially at that age, as they had more pronounced fine motor delays than they have now).  This allowed our project to remain fun throughout the whole process.

Each day, I would set out only a few pages, as to not overwhelm the kids.  Prior to starting, we would read through their entire stories that they had created up to that point.  We would then talk about their ideas for their pages for that day. 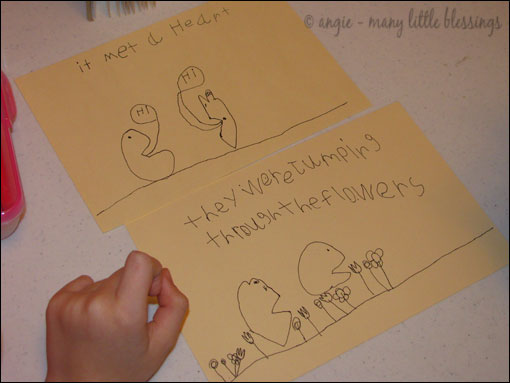 One of my sons opted to mimic more of the actual events in the books that we read, while my other son created new characters that were in similar (but different) situations than in the book.  I was not concerned about my son that didn’t create his own events.  Instead, I looked at it as a project in which he would learn by modeling, and perhaps the next time around, he would find himself better able to create his own stories.  As to not leave out my daughter (who was an early preschooler at the time), I had her join in, but let her work on it as mostly just an art project.

After the Project Was Finished

Once we finished our stories, the children were able to read their books to family members.  They were very proud to have created their own Missing Piece stories.

Making multiple stories in the same school year can be a wonderful and fun record keeping tool to see a child’s growth in areas such as handwriting, spelling, composition, and art work from the beginning to the end of a school year.

Angie, a domestically-challenged artist and writer, is a homeschooling mom to three children and writes about everything that happens in their lives between all the loads of laundry at Many Little Blessings. She is also the founder of The Homeschool Classroom, Catholic Mothers Online, Tiny Owl Designs, and Just a Tiny Owl {Etsy shop}.