No more diapers. When Cora made the transition into “big girl panties” my potty training days were over.

Can I get a high five, fist bump, spirit fingers?

There was no sadness in my house when Cora stopped wearing diapers. I don’t miss them at all. After changing diapers for almost 18 years and I don’t know how many diapers that adds up to, but I’m sure it’s in the thousands or tens of thousands.

Now that all seven kids are out of diapers, I’m going to tell you a little secret.

After the first two kids I decided potty training didn’t work for me or my kids.

I’ll save you the painful details of my experience with the first two, but let’s just say the ordeal caused me to decide to give up on potty training forever. 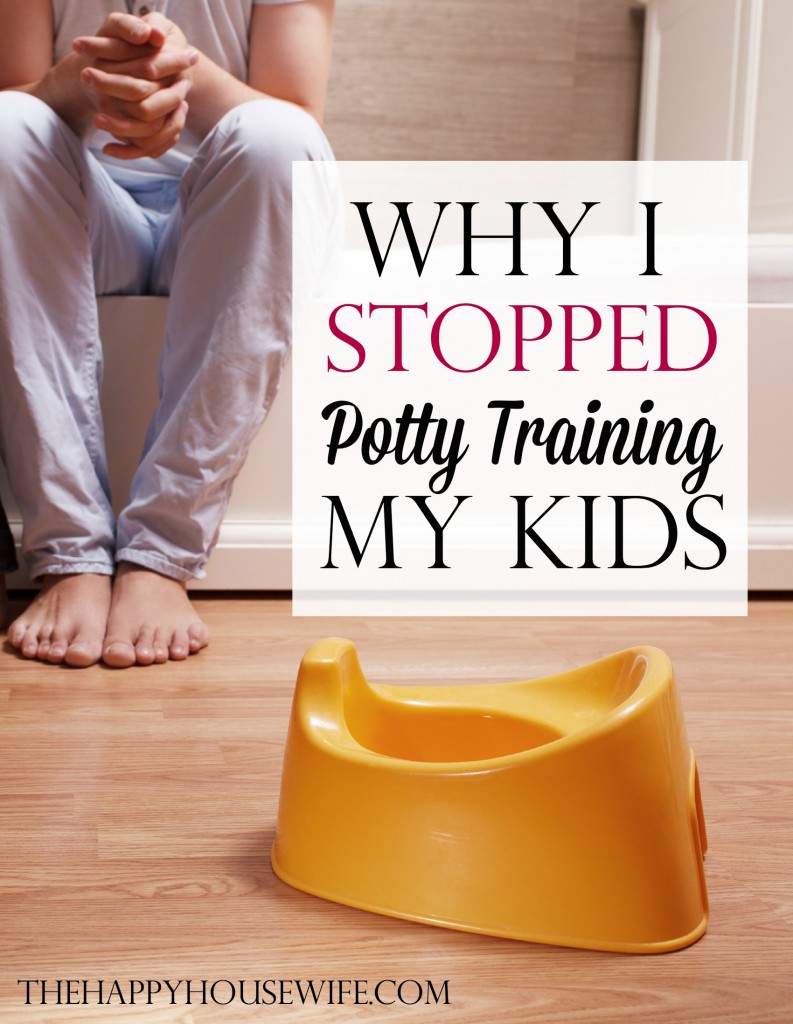 When baby number three came along I decided I was going to wait until he was ready to introduce the concept of underwear. At two and a half he came downstairs wearing his big brother’s underwear and announced to whoever could hear that he didn’t wear diapers anymore.

Since it took until my first two children were three to have potty training success I told him that he did wear diapers and to go back upstairs and bring me one. He refused and I got busy with another child and forgot he was wearing underwear.

From that day on, he wore underwear during the day (pull-ups at night until he was a little older) and had only one accident.

I don’t really count that accident because he was being chased by his brother (who wanted the toys he had) and I found him standing in front of the toilet screaming. Both hands held high in the air grasping the toys and peeing all over the place.

I couldn’t believe how easy it was to NOT potty train this kid. I decided I was going to try it with his little brother, and the three little girls who followed.

To my surprised it worked. I had one who needed a little extra encouragement to wear underwear, but basically the underwear transition was a breeze.

So what does this mean for you? Nothing if you don’t have kids in diapers.

But if you do, you might want to consider this. Most kids (without special needs) eventually will learn to use the potty on their own. They don’t need intensive (and expensive) bribing, cajoling, discipline, or tears (from you or them).

I wish someone would have told me, when I was trying to potty train a 20-month old, to relax and give it a little time. That doesn’t mean that a child might not be ready at 20-months. However don’t try and force them to be ready.

There are no prizes for potty training a child before they are two.

No one graduates from college at the top of their class because they started wearing underwear before the age of two. There is no award for mother’s who potty train the fastest.

And all your friends on social media who are bragging about how they potty trained their one-year old, ignore them.

In my humble opinion, a child is potty trained when they tell you they have to go to the bathroom. In the beginning, they may need encouragement. If they can’t tell you when they feel the need to “go” they probably aren’t ready to be wearing underwear full-time.

But I don’t want to spend any more money on diapers!

I know for many people, the cost of diapers is a big issue. The sooner your children are out of diapers, the sooner you have to stop buying them. However, I’ve known plenty of parents who spend more on bribes, books, and headache medicine than diapers because they tried to get their kids out of diapers before they were ready.

If you are struggling in this area, try the no-potty training method. We always had a little potty in the bathroom (so they could try it if they wanted to) and I often sat them on the toilet before they took a bath or when they woke up. But, I rarely forced the issue.

When they were ready, all my kids learned to use the potty. Without much help from me.

Stop stressing and wait until they are ready. It will be one of the best things you didn’t do during their childhood.

You might also enjoy these articles on Diapering from The Happy Housewife: