When Andrea won I was thrilled! I assumed she would be coming back to the Magic Kingdom with her family and sleeping in Cinderella’s castle. Then I learned that she would spending that night in the castle!  What an amazing opportunity!

Later that morning I was sitting listening to the speaker and I received this message from Andrea on my computer:

It was all I could do not to squeal with excitement during the conference. I was going to be spending the night in Cinderella’s Castle!!!!!

I would say something about dreams coming true… but I honestly never thought you could even spend the night in Cinderella’s Castle. We packed our bags that afternoon and at 4pm we met our carriage aka minivan.

Accompanying Andrea on the trip were Amy, Briana, Amanda, and Crystal.

Our driver Sean, provided the details of our magical evening. Our tour began at the Magic Kingdom. We had complete control of our night. We could ride attractions, spend time in the castle suite, shop, eat, it was up to us. When we arrived at a back entrance of the park we were assigned another guide, Steve.

It’s a HUGE deal to stay in Cinderella’s Castle suite. Cinderella’s Castle has one room and you can’t buy it. Disney gives away the suite randomly throughout the year. In the Year of a Million Dreams they would surprise one family a day with a night in the castle. Now, the room is given away every two weeks or so. The Castle Suite has only been slept in 600 times. (as of 2011)

I don’t think any of us knew what to expect when we started our castle experience. The rest of the day unfolded like a dream. Steve, the walking encyclopedia of Disney knowledge, shared stories and pointed out little details in the park I had never noticed before.

He was also our human “fast pass.” If we wanted to ride a ride, Steve walked us in the back entrance and we boarded the ride… no waiting! It was amazing. On every ride Steve shared with us the story of that ride. Since Disney was built by movie makers and not theme park designers every single ride tells a story. It was fun to hear these stories and learn more about the people who built this park many years ago.

What I didn’t realize in the moment, was that we were getting a Disney VIP Tour. You can purchase a VIP tour at any of the Disney parks in addition to a regular park pass. For instance, some of the tours include fast passes to rides in the park. If you haven’t done a VIP tour and you LOVE Disney, I highly recommend splurging at some point in your life and doing it.

VIP tours cost anywhere from $99 a person to thousands of dollars for the day depending on which package you purchase. I’ve heard that a guide can navigate an entire park in less than a day. If you see a group of people walking with someone in a plaid vest, they are on a tour. In addition to Disney guides, outside companies also sell VIP tours.

Since all the information about the tour can be found online, I’ll get right to the Cinderella’s castle photos. Our group took several hundred photos.  I’m sharing my favorites along with some that give you the best “view” of Cinderella’s Castle suite. 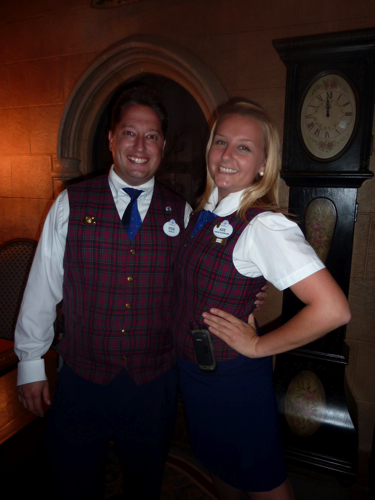 Two of our amazing guides, Steve and Kate, standing in the lobby of the suite. Notice what time it is on the grandfather clock? The clock in the lobby never strikes midnight…

After you enter the lobby, you ride a carriage (aka elevator) up to your room. A beautiful entry awaits when you depart the carriage.

There is a display on the wall with some of Cinderella’s favorite things, her glass slipper, crown, scepter, and three pumpkins, which were a gift from the Fairy Godmother, so she would never forget her humble beginnings. 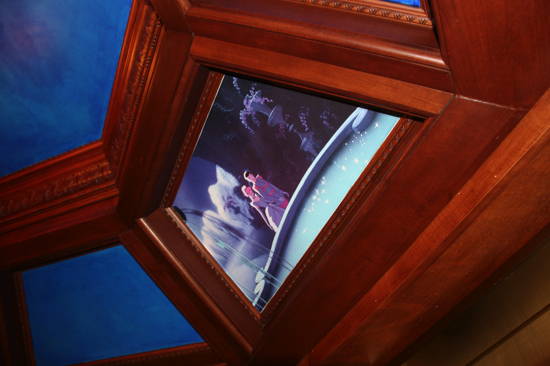 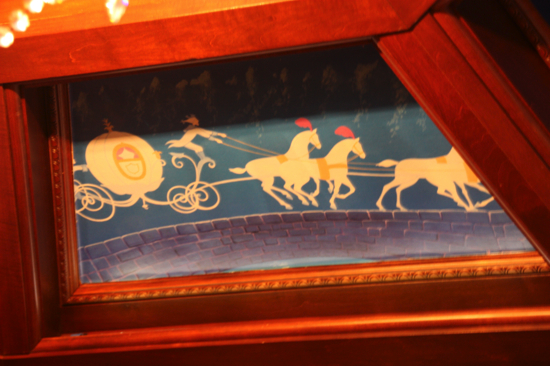 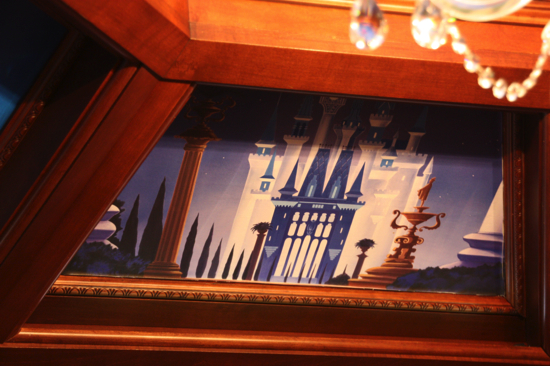 If you look up in the entry area you will see several images from the Cinderella movie.

On the floor is a tile mosaic of Cinderella’s carriage. It is made of over 30,000 tiles including tiles made out of gold and silver.

A Peek Inside the Suite 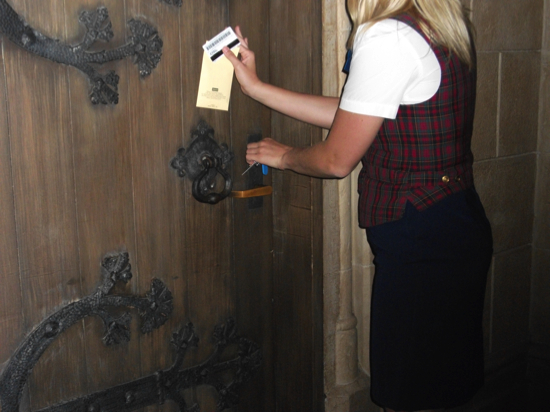 The suite itself is on the 3rd floor (I think) of the castle. It consists of three rooms, a bedroom, bathroom and sitting area. The suite isn’t very big, but it slept six people comfortably.

You enter the suite into the bedroom. This room has two queen beds, small desk, nightstand, fireplace, television, table and chairs and one window. 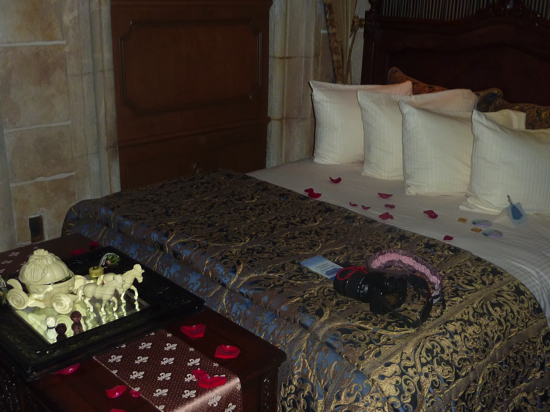 You walk through the bedroom to the sitting area. This room has the most natural light and contains a pull-out couch, large wall sized wardrobe, television, and the stained glass windows that tell the story of Cinderella. (Pictures of that are below)

The bathroom has two sinks, a large tub, shower, separate throne room, and sitting area. It is off the bedroom. 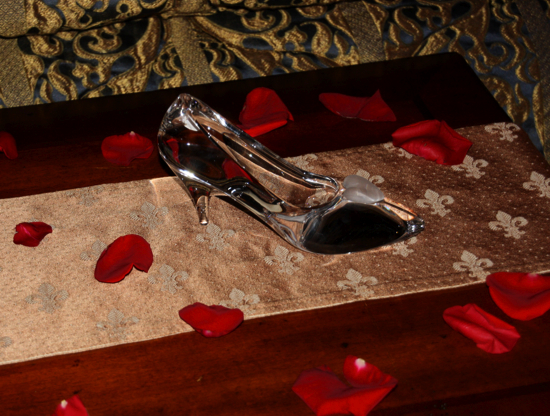 There was a glass slipper for Andrea to take home. 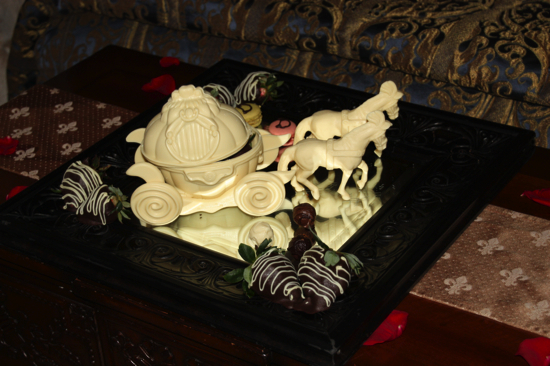 The castle suite is equipped with modern technology but it is hidden from view. It even has wi-fi just in case Cinderella wants to update her Facebook status. There is a castle phone and you can call anywhere in the United States for free. We all took turns making calls to our family and friends on the princess phone. 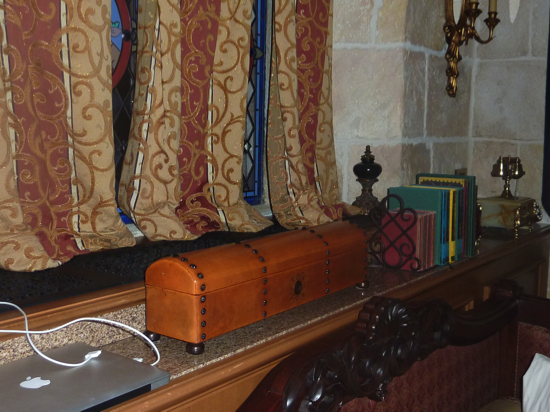 The castle suite is filled with gifts that Cinderella has received from her friends. There’s a telescope from Captain Hook and books on loan from Belle. (Macbook Pro on loan from the bloggers)

Stained Glass Windows in the Castle 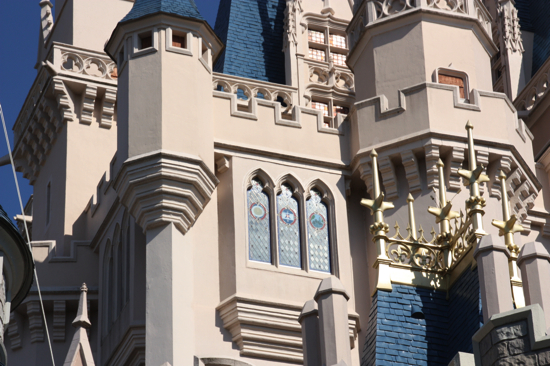 Next time you are visiting Magic Kingdom take a closer look at Cinderella’s Castle. Notice the three stained glass windows about halfway up the castle?  They are located on the Peter Pan side of the castle in Fantasyland. Those are windows in the suite.

There are a series of stained glass windows that tell the story of Cinderella. You can view all these windows from the back side of the castle in Fantasyland. 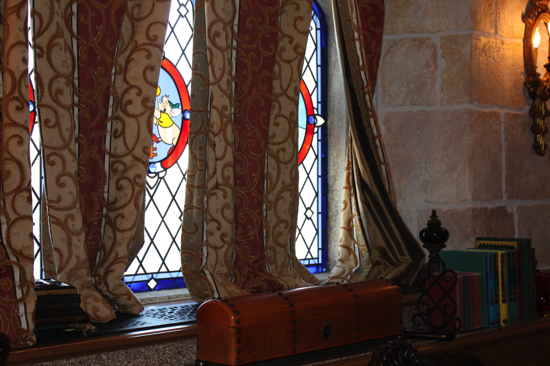 There are a series of stained glass windows that tell the story of Cinderella. You can view all these windows from the back side of the castle in Fantasyland.

It is hard to get a good view from the caste suite since all the windows are stained glass. 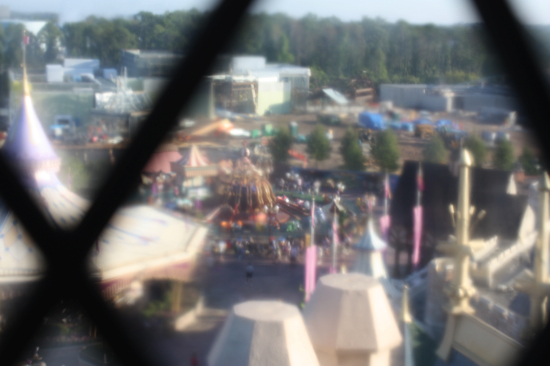 When you stay in the castle you get your own key. The key is just like all the other Disney Resort keys (back when Disney resorts had keys), except this one is white and it has the castle logo on it. My key is now framed on my bookcase!

The Magical Touches of the Castle Suite

This beautiful mirror is actually a television. To turn it on you push a button on the magic wand. Tinkerbell flies across the mirror and it turns into a TV!

The castle has a fireplace that glows and the back of the fireplace lights up in a pattern. One of the patterns is a hidden Mickey. If you blink you miss it! 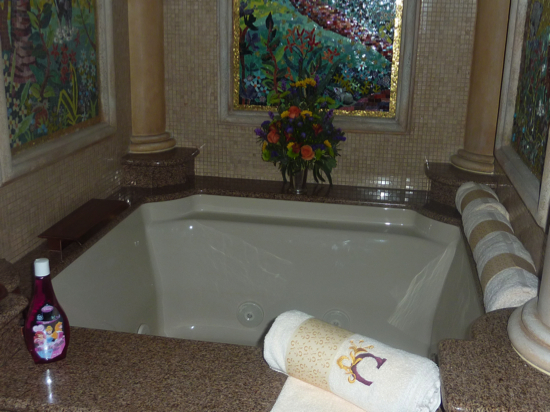 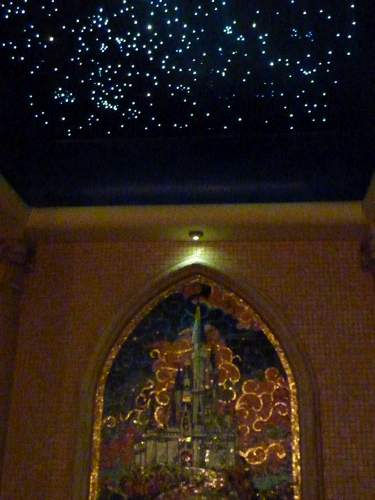 This is the ceiling above the tub in the bathroom. The lights twinkle like the stars. 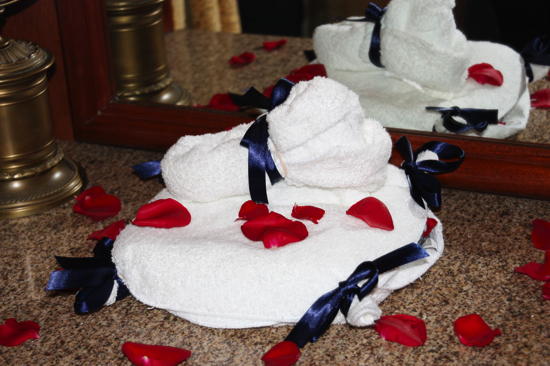 A glass slipper made from a towel waited for us in the bathroom.

Would you expect anything else in a princess bathroom? Yes, the toilet is a throne. 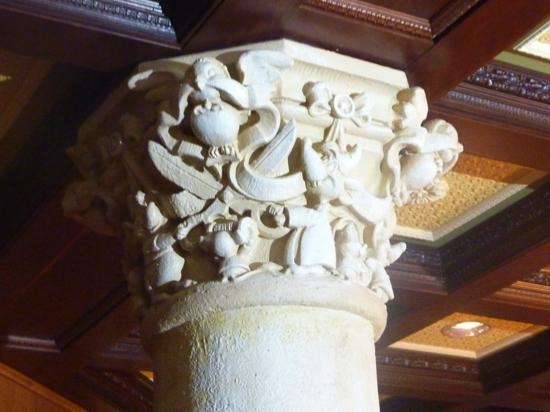 There are columns inside the suite. They story of Cinderella is carved into the top of each column. 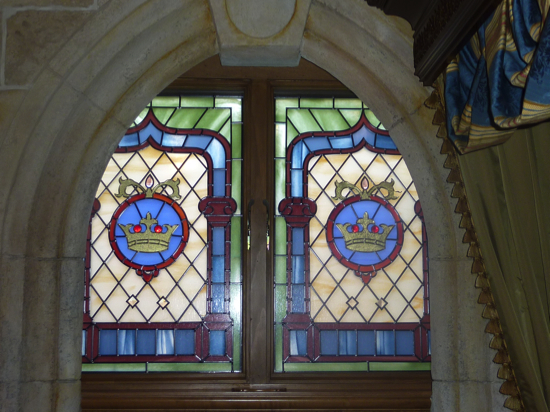 The one thing that amazed me about Cinderella’s Castle suite and all of Magic Kingdom is the attention to detail.

Remember this photo from the beginning of the article?

That picture is in the walkway in the castle that thousands of people walk by every day. Notice the checkered floor in the mosaic? 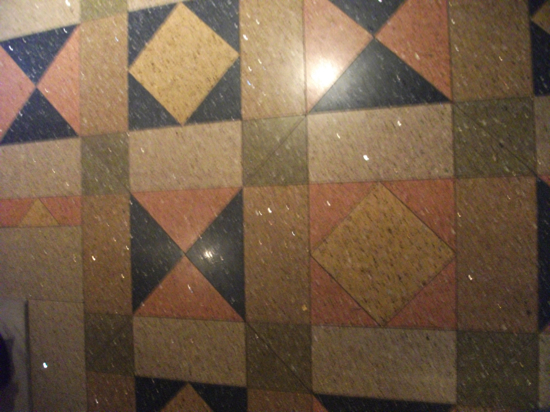 This is the floor of the suite, does it look familiar? It is the same floor as the mosaic! Imagineers carefully plan and create everything you experience at the Walt Disney World.

It was fascinating to learn about these details during our stay at the castle.

Whenever we left the room to watch the Main Street Electrical Parade and the fireworks we came back to our beds’ turned down and covered with rose petals. 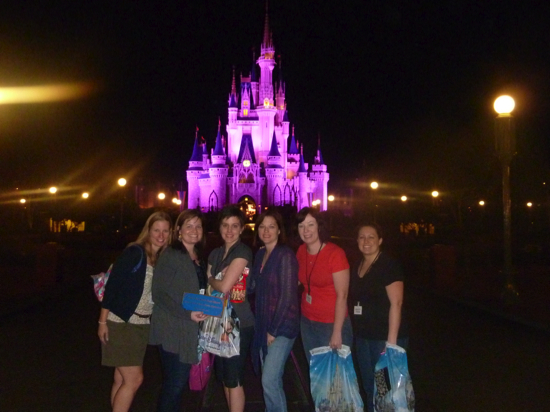 Disney… at 2am, the only ones left in the park!

Standing in the middle of an empty and quiet Fantasyland remains one of my favorite memories. It is strange standing in the middle of the Fantasyland when everyone else is gone. The carousel’s lights are twinkling and the horses are going around, but no one is riding. The only sounds you hear are the street cleaner machines. Magic Kingdom without people is actually quite magical.

Shortly after we took the photo we quickly changed into our Cinderella suite bathrobes and scurried outside one more time to the bridge in front of the castle. We all stood there for a few minutes, taking in the quiet and then took our carriage back up to the suite and went to bed.

The morning after my night in the castle

After sleeping a few hours in Cinderella’s Castle Suite, we had breakfast with the Princesses at Cinderella’s Royal Table. Anyone can dine with the princesses inside the castle, but you must make reservations months in advance as the restaurant fills up very quickly.

Michael took over as our guide in the morning to finish our magical experience. While Steve was the walking encyclopedia, Michael was the Disney humorist. He told us funny stories about Walt and Roy Disney and gave us a behind the scenes look at Animal Kingdom. Even after we left the parks Michael had photos delivered to our hotel room and went above and beyond our expectations.

Imagineers built Cinderella’s suite as an office for Walt. Contrary to popular rumors, Walt never used the castle suite as his apartment. Unfortunately, Walt died before Walt Disney World opened in 1971, and the suite turned into an office for phone operators. After they outgrew the suite it remained vacant until a few years ago when they decided to create Cinderella’s suite.

Terminally ill children do not stay overnight in the suite, since there is limited access to emergency care inside the park.

Staying in Cinderella’s Castle Suite is sure to give you a bad case of I-want-to-tell-everyone-I stayed-in-the-castle-itis. The symptoms range from mentioning it in casual conversation to the grocery store cashier…. “I had the best fresh fruit when I stayed in Cinderella’s Castle” to telling your family the same stories over and over because you literally cannot stop talking about it.

It’s been over eight years since my night in Cinderella’s castle and I’m still finding ways to casually mention it in conversation.

Staying overnight in Cinderella’s Castle was a once in a lifetime experience and our guide’s Michael, Steve, Sean and Kate made it truly magical weekend!

See more about our Disney Trips including tips & tricks for making the most of vacations to Disney.  Having lived in Orlando for years, Disney is a way of life!  🙂 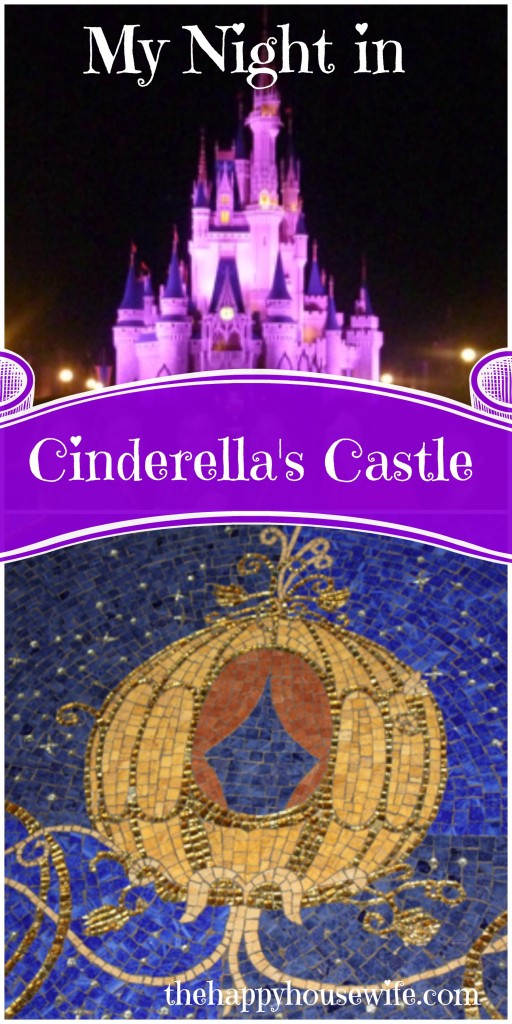 57shares
« How to Respond to Negative Comments
Cora's Chores »