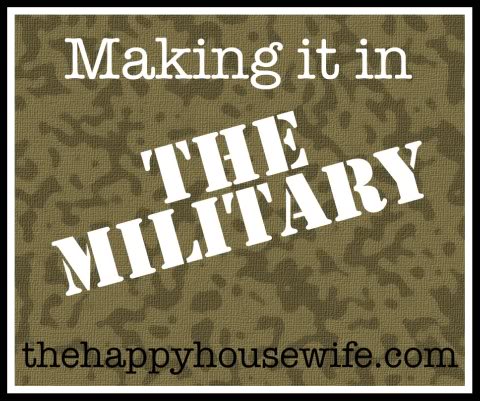 The following is a guest post from my friend Monica. You must visit her site, she has great content, but she also has the most fabulous hair of anyone I have ever seen!

Monica is the mom of three precious preschoolers who keep her on toes at all times. She has been married to her husband, Keith, for eight years. Keith is a Chaplain in the Army and they are currently assigned to an overseas post in Germany. You can find her writing about family, faith, and the military on her blog Daily Dwelling.

Deployments and separations have become a way of life for military families. They are hard….very hard, but they are also survivable.

Our family has been through two deployments. They have been very different from one another. During my husband’s first deployment of twelve months, my twins were babies and we lived close to family, but away from the Army post that he was stationed out of. During his second deployment of fourteen months, I had three small ones to take care of and we were living in Germany, away from the support of civilian friends and family.

Each situation had its ups and downs, its pros and cons, but we made it through them both.

Surviving and Thriving in a Deployment

Before the deployment begins, accept it and begin planning. Plan for how you will communicate with your loved one and how your family will function during this time of separation. Plan for emergencies. Plan for the worse case scenarios. No, some of these are not things that we want to think about, but if we don’t they will catch us completely off guard. Having a plan in place is often more than half the battle.

Just because your spouse is serving the country away from you doesn’t mean that they have to be cut out of your life. There are so many ways, especially because of technology, to keep communication open. Before the deployment takes place, sit down and talk about your expectations for communication. Things may change once they are downrange, but again, having a plan and being honest about your needs and/or expectations can prevent a lot of hurt feelings.

During my husband’s first deployment, he wrote a letter every single day. Yes, I have all of them saved. We also talked on the phone almost daily, but we used e-mail very sparingly and did not talk via web cam at all. During his second deployment, we e-mailed and talked on the phone on a daily basis. We also used skype to talk over web cam a lot during the latter part of his deployment. This gave the children a very tangible way to stay in touch with their Daddy.

You will have days that you struggle. You or your kids may get sick. You may just need a break at some point. This will all come through your support system. You may create your own support through friends from church, family members, friends within the military community, online communities, the Family Readiness Group, or any combination of those, but you will need to have one. The deployment will be so much harder than it has to be if you try to do it all on your own.

The Army, and I’m sure the other branches of the military as well, have many programs in place to help relieve the burden that is caused by deployments. Check into them and take advantage as much as you can. The Family Readiness Group is your resource to find out what is going on in your spouse’s unit and can be a great outlet for finding information about the resources that are available. The Army Family Covenant provided extra respite hours of childcare, a reduced hourly childcare rate, free programs for children and youth to participate in, and child care for FRG meetings. I was able to take advantage of all of these and they really helped to relieve some of the stress of the deployment. Yes, they all involve childcare, but that is a huge issue for families!

There are many people out there that want to support the military and military families. They are more than willing to help in any way that they can. Army spouses can be a proud bunch that prides themselves on being independent and self-sufficient (I am and I do!). It can be a humbling experience to accept offers of help, but I have found many times that it often does more for the person that is doing the helping than the person being helped. When you refuse help, you are refusing someone the privilege of being a blessing to you! So, swallow your pride and accept those genuine offers of help!

Before, during and even as you near the end of the deployment, sit down and write out goals for yourself and your family during this time. I had many goals. Some I achieved, some I didn’t, but having a goal gave me something to work towards during the hard times.

Don’t expect too much of yourself. You probably won’t achieve all of those goals that you set and you will have bad days. Don’t expect that you won’t. Be realistic with yourself and with this time in your life. At the end of the deployment, be ready to celebrate just for making it through, because that in itself is a huge accomplishment!