Sorry friends! I know many of you have been waiting, worrying, and praying! Things have been crazy here the past few weeks. I’ll try to give you the longer/ shorter version of a very long story.

This all started back in November, not long after the deployment officially began. Commander sent me an email saying there was a problem with his orders.

The problem, there was no funding for the job they sent him there to do. This is a problem because if there is not funding you can’t be there. The best/ worst part, the funding was cut last July, but the information was just trickling down and had finally reached the right person, who then realized there was a little bit of a problem.

I can laugh about it now that, but at the time I was mad. My family was going through this for nothing! Technically he never should have even been deployed, and the reaction was basically, “oops.”

Of course, true to form for our lives they now had to figure out what to do with a guy who by federal law had to be out of the country (Afghanistan) by January 31st.

For the next several weeks, we lived with daily changes to the situation. We had no idea if he was coming home, moving jobs, staying longer, it was totally up in the air. From the minute he told me the news we decided not to tell anyone there was a possibility of him coming home early.

There were too many what-ifs, maybes, and probably nots. Each day we had different information and many days it wasn’t the information I wanted to hear.

I decided not to count on anything until I got confirmation he was on a plane headed home. We’ve been doing this long enough to know better. As you can tell from the video the kids had no idea he was coming home and I’m so glad we did it that way. There were many days when it wasn’t going to happen and I can’t imagine them going through that sort of emotional roller coaster.

So for those of you who have emailed, messaged and commented. He is home for good. Our deployment days are over. This deployment was probably the hardest thing we’ve ever done as a family and I’m grateful it ended early.

I also struggle. I know deployments rarely end early for good reasons. I know most of the time they are longer and I hurt for those families who are still going through it every day. My heart breaks for the families who have seen their deployments get extended or just getting started. It is hard.

Just this weekend I saw a friend who began her deployment story yesterday. I felt a pain for her that was raw. I cried huge tears as we prayed for each other. It stinks that we have this common bond, but we do and I’m glad.

So while our deployment story is over we have lots of new stories beginning. Like this one. 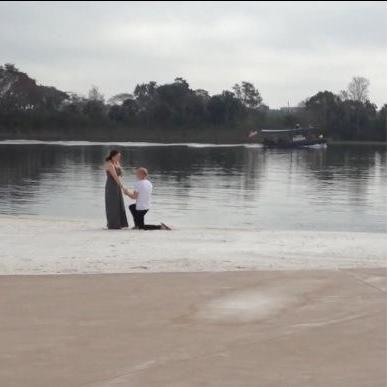 That’s right, I’m going to be a mother-in-law!!!!! Can you believe it?!?! Me either. I’m much too young to have a daughter old enough to get married! 🙂

So, another chapter begins as we close our deployment chapter. From the bottom of my heart I am thankful for your prayers, emails, comments, texts, and private messages over the past several months. We did not do this alone and I’m grateful for your support through our journey.

1 Thessalonians 5:16-18  Rejoice always, pray continually, give thanks in all circumstances; for this is God’s will for you in Christ Jesus.

My husband has been deployed to the Middle East for 274 days.  These are my real thoughts expressing my heart during his absence.  I appreciate your prayers and kind words as we cope, adapt, and carry on without him until August 2014.  To read from the beginning, click here.